Today we are going to talk about a very special fish, which is part of the Alestidae family, the “Hydrocynus vittatus”, commonly called “Tigerfish”.

Not to be confused with its big cousin the Hydrocynus Goliath, which is much bigger than our main interested party. Rodmaps went to hunt him down in Botswana, on the Okavango Delta. This delta has the particularity of flowing into the Kalahari Desert, unlike the others which normally flow into the ocean.

It is a magical place with an extraordinary flora and fauna, hundreds of kilometers of papyrus where dozens of endemic bird species nestle in this region of the world. You will come across hippos, Nile crocodiles, antelopes, elephants etc ... 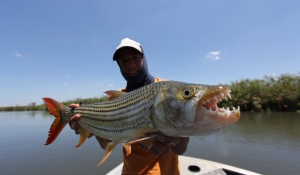 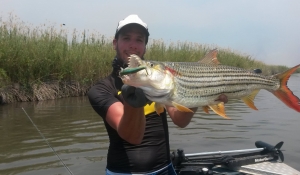 Our Tigerfish has an impressive four-part jaw, a row of canines that fit perfectly into each other, a tapered body built for speed. He also has a silvery robe, horizontal black lines all the way down the body, and orange fins. This species weighs on average between 1 and 10 kilos, but can exceed 15 kilos. It all depends on the geographic region where you will be looking for it. 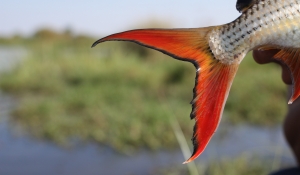 Like any predator, it spends a lot of time resting, and hunting other fish in its ecosystem. It tends to stand in the feet of papyrus, to ambush tilapia (its favorite prey), but also to escape the big African catfish and the Nile crocodiles who are happy to eat them.

How to fish for Tigerfish?

A few months in the year, an incredible phenomenon occurs in the delta: “The Barble Run” in other words, “the race of the mustaches”, it is about the presence of the catfish which come to eat the fry of the forage fish which hatched in aquatic vegetation. You can hear the sound of the jaws of predators closing on defenseless prey. The tigerfish are not far away, they stand just outside, chasing the survivors who try to escape.

The egrets don't hesitate to join in the feast, which will give you a great visual cue for where to throw. If you don't have any of those things, power fishing is a great way to trigger keystrokes while letting yourself drift along the river, which has earned us some great specimens.

Another way that will help you locate them is the presence of crocodiles. If you see any, fish around as the saurians readily devour them, it is a big part of their diet.

This fish is extremely strong on the “weight / power” ratio. Precise and neat equipment is necessary to fish it correctly. Because of its teeth, we advise you to fish with steel at the bottom of the line because we have been cut from 100 lbs of fluorocarbon resistance. As you can see, you have to go to great lengths. Changing the original hooks is also recommended.

The Fishing Club, a look back at the genesis of the show with David Vengerder

Rodmaps is above all the story of Nicolas and Matthieu, two friends passionate about fishing. Since our childhood, our passion drives us to travel through France and to travel around the world in search of adventure and trophy fish. Through Rodmaps, we want to share our passion for fishing with as many people as possible and make people discover the joys of this sport around us, because yes, fishing is a sport!

KAMEHAMEHA !!!!! Thank you Cédric for this species!